Have you ever wondered why not all dairy cows look the same? That’s because there are different breeds and types of cows, just like dogs or horses. However, all dairy cows are taken care of by farmers, eat nearly 100 pounds of nutritious feed and drink nearly a bathtub full of water each day.

In the U.S. there are six major breeds of dairy cows – Ayrshire, Brown Swiss, Guernsey, Holsteins, Jerseys and Milking Shorthorn. Keep reading to learn more about each type of cow! 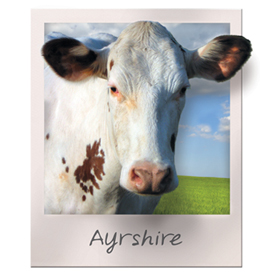 Ayrshires are recognized as one of the most beautiful of the dairy cattle breeds, ranging in a variety of colors from light to deep cherry red, mahogany, brown or a combination of these colors with white.

Characteristics: Ayrshire’s 1,200-pound medium stature equips them to be a strong, rugged cow that can easily adapt to any environment.

History: Ayrshires came to the United States from the County of Ayr in Scotland in 1822.

Fun Fact: The Ayrshire breed is widely known for its “vigorous personality.”

Brown Swiss cows are typically solid brown, varying from very light to dark and are easy to spot with their large, floppy ears.

Characteristics: These docile giants weigh in at around 1,500 pounds, making them one of the largest dairy breeds. They are known for their longevity and calm temperament.

History: Brown Swiss came to the United States from the mountains of Switzerland in 1869.

Fun Fact: Many historians consider Brown Swiss to be the oldest cattle breeds in existence, with records dating back to 400 B.C. 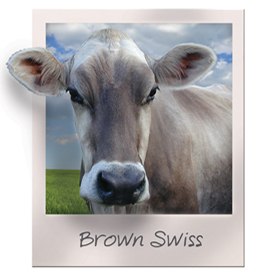 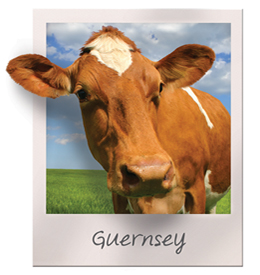 Guernseys are fawn and white in color and are known for their gentle disposition.

Characteristics: Weighing in at around 1,200 pounds when full grown, Guernseys are about 3/5 the size of Holsteins, the largest breed of cows.

History: In 1831, Guernseys came to the United States from the Isle of Guernsey, an island in the English Channel off the coast of France.

Fun Fact: Guernseys are often referred to as the “Royal Breed” because their milk is almost gold in color, producing high-butterfat, high-protein milk with a high concentration of betacarotene.

Holsteins are easily recognized by their distinctive black and white (and sometimes red and white) coloring. In fact, they are the most popular breed of dairy cattle in the U.S.!

Characteristics: Holsteins are one of the largest dairy breeds, weighing around 1,500 pounds and measures almost five feet tall at her shoulder. They are known for their high milk production.

History: The Holstein cow originated in Europe, and was imported to America from Holland in the mid 1800’s.

Fun Fact: No two Holsteins have the same spots! 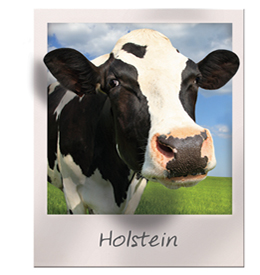 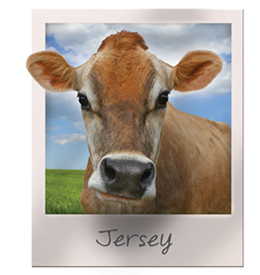 Jerseys are the second most popular breed of dairy cattle in the U.S. and often stand out with their fawn-color coat, prominent eyes and long eye lashes.

Characteristics: Jerseys are the smallest breed of dairy cow weighing in at around 900 pounds when full grown. They are known for producing milk with higher percentages of protein and butterfat, which makes their milk perfect for making dairy foods like cheese and ice cream.

History: The first Jerseys were brought to the U.S. in 1850 from the Island of Jersey, a small British isle.

Fun Fact: With its small size and high milk yield, the Jersey breed is regarded as the most efficient dairy breed.

Milking Shorthorns are considered the most versatile of all the breeds, and are red, red and white, white, or roan in color.

Characteristics: Milking Shorthorns are average in size, weighing about 1,400 pounds when full grown. Originally, Milking Shorthorns were imported to the U.S. as a dual-purpose breed, meaning they were used for both milk and beef. Today, there are two separate breeds – the dairy cattle breed and a beef cattle breed.

History: The Milking Shorthorn originated in Northeastern England and arrived in the United States in 1783.

Fun Fact: Milking Shorthorns were helpful in providing early settlers with not only milk, but meat and strength to pull wagons. 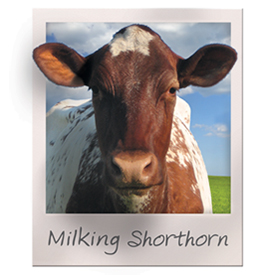 Article by: Erin Williams of the American Dairy Association, Mideast. Erin is the Communication Manager for the American Dairy Association Mideast. A recent graduate from The Ohio State University, Erin enjoys spending her free time at home helping out on her family’s dairy farm. She also enjoys exhibiting her Jersey cows at state and national levels.